Singapore, officially the Republic of Singapore, is an island city-state in Southeast Asia. Singapore is known for its transition from a developing country to a developed one in a single generation.

The city ranks highly in numerous international rankings, and has been recognised as:

The Economist has ranked it as the most expensive city to live in since 2013. Singapore ranks 9th on the UN Human Development Index with the 3rd highest GDP per capita. It is placed highly in key social indicators like education, healthcare, life expectancy, quality of life, personal safety and housing. Although income inequality is high, 90% of homes are owner-occupied. According to the Democracy Index, the country is described as a “flawed democracy”.

The city-state is home to 5.6 million residents, 39% of whom are foreign nationals. There are four official languages: English, Malay, Mandarin Chinese and Tamil. Most Singaporeans are bilingual and English serves as the nation’s lingua franca, while Malay is the national language. Pew Research Centre has found that Singapore has the highest religious diversity in any country.

Singapore is a unitary parliamentary republic with a Westminster system of unicameral parliamentary government. As one of the five founding members of ASEAN, Singapore is the host of the Asia-Pacific Economic Cooperation (APEC) Secretariat and Pacific Economic Cooperation Council (PECC) Secretariat, as well as many international conferences and events. It is also a member of the East Asia Summit, Non-Aligned Movement and the Commonwealth of Nations.

Singapore is identified as a tax haven and the currency is the Singapore dollar(S$).

In this article we have listed some of the key factors multinational companies should consider when setting up business in Singapore from a Global Payroll Perspective.

Singapore is a safe and efficient place for international companies to do their business. Currently there are over 7,000 multinationals doing business in Singapore. The process of business registration is simple and smooth and can be done on the website of Singapore’s Accounting & Corporate Regulatory Authority (ACRA).

Government approval is generally not required for foreigners to establish business in Singapore and 100% foreign ownership is permitted. There is an exception for banks and other financial institutions, which require approval from the Monetary Authority of Singapore and must obtain certain special licenses.

In-country bank account is not mandatory to make payments to employees or authorities in Singapore. An office address is a minimal requirement by law, if you plan to register a:

Payroll in Singapore is regulated by law and there are no payroll taxes. Employers in Singapore are responsible for submitting income tax returns and paying social taxes for employees.

According to TechCrunch, Singapore has taken steps that moved it closer to the introduction of cryptocurrencies into the economy. Employers and employees that choose to use digital currencies for their remuneration or revenue are generally subject to standard income tax rules.

The tax year matches the calendar and runs from 1st January to 31st December.

The corporate income tax rate is 17% on chargeable income.

Companies will be granted a 20% Corporate Income Tax Rebate capped at S$10,000. 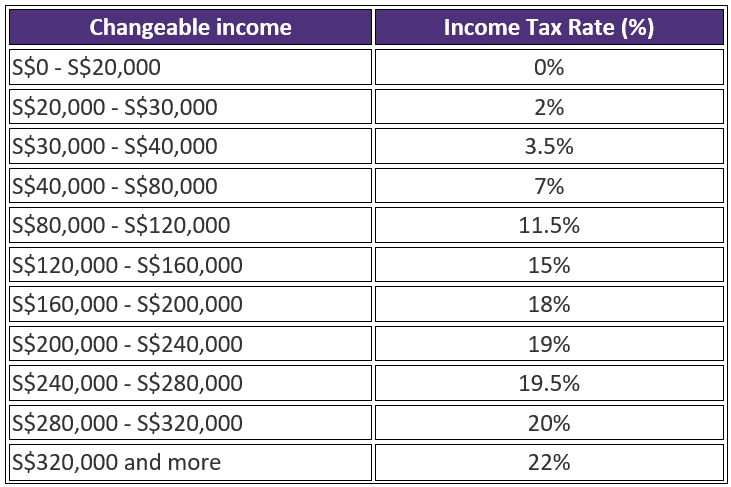 *Tax rates for residents only.

Only Singaporean citizens and permanent residents are required to contribute to the Central Provident Fund (CPF) which is the national pension scheme. Expatriates are not required to make social security contributions.

Minimum Wage and Wage Payment: There is no national minimum wage for all workers and employee’s salary can be negotiated by employers and employees. Salary is simply remuneration paid for work done under a contract of service. Besides traveling, food or housing allowances, it also does not include pension, expenses incurred during work as well as retrenchment benefits. Salary is paid monthly. Singapore has legislation which requires itemized payslips to be issued to all employees – it is legally acceptable to issue payslips online.

Overtime: Overtime work is any work done in excess of the normal hours of work (excluding breaks). An employee can only work up to 72 overtime hours in a month. For overtime work, you will be expected to pay at least 1.5 times the hourly basic rate of pay. Payment should be made within 14 days after the last day of the salary period.

Find out more about the eligibility and entitlements for different types of leave on the Ministry of Manpower’s website.

Bonuses and Special Benefits: Annual bonuses of one month’s salary or more are common practice in Singapore, but not mandatory.

The SG Bonus was announced in Budget 2018 to share the fruits of Singapore’s development with Singaporeans. The amount of SG Bonus is tiered according to income, with more for those earning less:

*Note: Individuals who own more than one property are eligible for SG Bonus of $100.

Workers’ compensation: All employees regardless of the salary level, with some exceptions, are covered under the Work Injury Compensation Act (WICA). Medical leave wages, medical expenses and lump-sum compensation for permanent incapacity or death can be claimed. Claims can be made up to 1 year from the accident. Learn about the types of compensation and their limits.

Record keeping: The employment records generally must be kept for a minimum of two years for current employees, and one year for ex-employees.

Foreign employees are entitled to the same rights as Singapore citizens and are generally covered by the same tax and workplace laws.

Different types of visas exist for foreign workers depending on skill level. The following are the types of visas employees may apply for when working abroad in Singapore.

All visa requirements and regulations can be found on Singapore’s Ministry of Manpower website.

The employment income of non-residents is taxed at the flat rate of 15% or the progressive resident tax rates (see table above), whichever is the higher tax amount.

Payroll processing in Singapore involves specific rules and regulations and the status of foreign workers should be also taken into account. Contact the Payslip team to learn how our global payroll management software solution will help your multinational organization to reduce costs and minimize the risk of setting up your business operations in Singapore.