Mexico, which officially is known as the United Mexican States, is a federation of 31 states and the federal district of Ciudad de México (Mexico City).

With a population of 129 million, Mexico has the second-highest gross national income in Latin America after Brazil. However, nowadays, establishing operations in Mexico is a bold business move for multinational organizations.

While Mexico’s economy is generally diversified, it remains closely synchronized with the US business cycle. With the signing of the USMCA agreement, short-term uncertainty over North American trade has decreased. Overall, the economic impact of USMCA on Mexican-US trade is likely to be limited, as it is effectively a small modification of the pre-existing NAFTA agreement.

Concerns over the policies of the new administration in Mexico and the ongoing normalisation of US monetary policy are weighing on the currency, with the Mexican peso (MXN$) exchange rate expected to remain volatile in 2019.

Yet for multinational organizations looking to expand into a country with low labor costs and an active tourism environment, Mexico can be a smart outpost for international operations.

Detailed below are the key points businesses operating in Mexico must understand in order to stay compliant from a Global Payroll Perspective.

BASIC FACTS ON PAYROLL IN MEXICO

Foreign workers in Mexico are offered the same protections and legally-mandated benefits as resident workers. Mexican employers are required to have a workforce in which at least 90 percent of the workers are Mexican citizens.

Mexico provides special treatment for businesses that qualify as maquiladoras. Maquiladoras are foreign-owned companies in Mexico that are able to import machinery and materials duty free, export finished products around the world and avoid permanent-establishment status for tax purposes.

Employers must keep accounting documents on record for five years after they were emitted.

The tax year runs from 1st January to 31st December.

The Corporate Tax Rate in Mexico stands at 30 percent.

Effective for 2019, for residents, Mexico’s personal federal income tax rates and minimum and maximum amounts of annual and monthly income for each tax bracket are as follows: 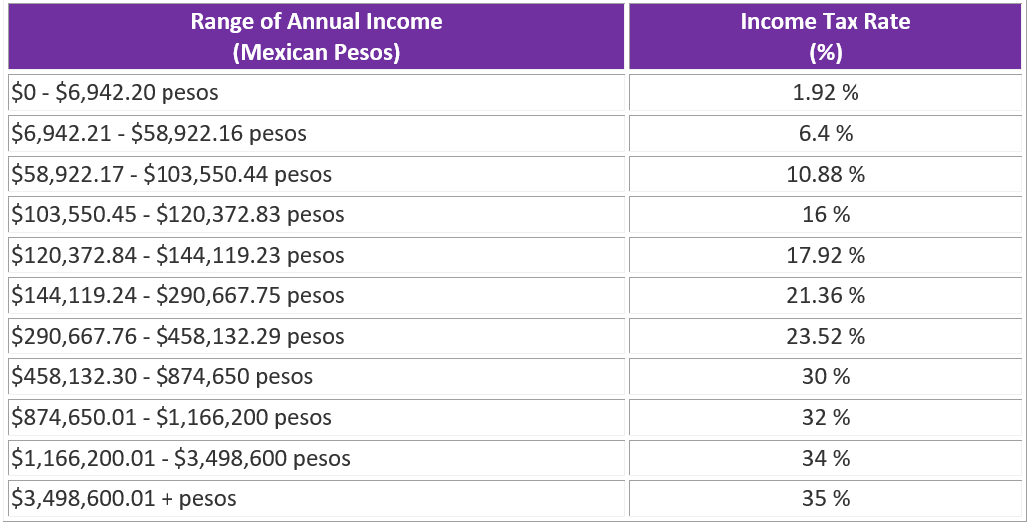 There is payroll tax in Mexico which is levied at the state level. The rate ranges between 1 and 3 percent of salaries and is withheld by the employer.

In Mexico, the sales tax rate is 16 percent and is a tax charged to consumers based on the purchase price of certain goods and services.

Mexico has entered into double tax treaties with many countries that may reduce the tax liability on foreign-source income generated by foreigners.

The Social Security Rate levied on employers is 7.58 percent. This is composed of retirement pensions, healthy and maternity insurance, occupational risk, day-care, disability and life insurance, and unemployment and old age insurance.

All 31 Mexican states and the federal district impose a tax on company payrolls. Coverage, rates and other details of the tax vary from state to state.

Manufacturers and wholesalers of certain goods are charged a tax on production and services, such as alcoholic beverages and tobacco. The rates vary by product.

Ownership of real property is taxed at the municipal level.

Labor and benefit requirements, such as minimum wage and overtime, and are governed by Mexican law even if an employment contract was signed outside of Mexico. Employers have an obligation to contribute to private retirement and old age insurance accounts of employees. In addition, profit sharing is required for most employers.

The full list of Mexico’s profession daily minimum wages is available from the website of Mexico’s National Minimum Wage Commission.

Overtime: Overtime is limited to three hours per day and cannot be worked more than three times per week. Workers are paid at twice their regular hourly wage for the first nine hours of overtime in a week and at three times their regular wage thereafter. Workers under 16 years old are not permitted to engage in overtime work. Employers must pay double salary to workers who are called in on their day off. Those who work on Sunday receive their regular wages plus an additional 25 percent.

Hours of Work: Eight hours is the regular workday and 48 hours are a regular workweek. Employees have one day of rest per week with full pay guaranteed. Most employers adopt a 40 hour workweek.

Holidays: Workers who are required to work on a legal holiday are entitled to double pay in addition to their regular pay.

Employees are entitled to a 25 percent premium above their regular salary for vacation pay.

New fathers are entitled to five days of leave for the birth of a child or adoption of a child.

When an employee returns to work after maternity leave, she is entitled to two half-hour rest periods a day to feed her baby. Employers can fulfill this obligation by reducing the shifts of eligible female workers by one hour each day.

Wage Payment: Wages must be paid every week to employees in positions of manual labor and every 15 days for all other employees. Wages generally are paid on a Saturday.

Employers are required to contribute to private retirement and old age insurance accounts of employees who did not have a government retirement pension account prior to July 1, 1997 or opted out of the government account and into the private account.

The rates and thresholds for contribution to private retirement funds are calculated based on a employee’s base contribution salary. More information on taxes to fund social benefits in Mexico is available in the Social Taxes section.

Most employees have a constitutional right to a share of the profits of their company if the company during the previous fiscal year had annual income of at least $300,000 pesos.

By Dec. 20 of each year, employers are required to pay all employees a Christmas bonus equivalent to 15 days of regular wages. Employees who have worked less than one year receive a prorated bonus.

Termination Pay: If an employee resigns, the employer must compensate the employee for unused vacation and pay a prorated portion of the Christmas bonus. If the employee has worked for the employer for 15 or more years, the employee is entitled to an additional sum equivalent to 12 days’ salary for each year of service.

Mexico employs the principle of “job stability,” which requires that employers have grounds for dismissing their employees.

For tax purposes, nonresidents pay taxes as Mexican citizens except in the case of those working under the maquiladora tax regime.

The following people are considered to be residents in Mexico:

Residents in Mexico, despite having foreign nationality, will pay taxes as any other national resident individual in Mexico.

Visas: Non-Mexican citizens seeking to work legally in Mexico must obtain a temporary or permanent resident visa. Foreign nationals must obtain one of the following visas in order to work in Mexico:

This visa allows foreign nationals to live and work in Mexico and receive a local salary for up to one year.

This visa authorizes citizens of countries bordering Mexico to the south to live and work in Mexican border regions for up to one year.

This visa authorizes foreign nationals to live and work in Mexico for up to four years.

This visa authorizes foreign nationals to live and work in Mexico indefinitely.

A working holiday visa scheme is in effect for countries that take part in the Pacific Alliance, including Chile, Colombia and Peru. Since then, bilateral working holiday agreements with Canada, France, Germany, New Zealand, and South Korea also have gone into effect.

Taxes:  Nonresident employees on temporary assignments of less than 183 days hired by nonresident foreign firms are exempt from income taxes, while those who have worked for longer than a year are subject to the following tax:

Mexic also has an income tax treaty in effect with the special administrative region of Hong Kong.

To learn more about payroll in Mexico and for further information on Payslip’s global payroll services contact us today!