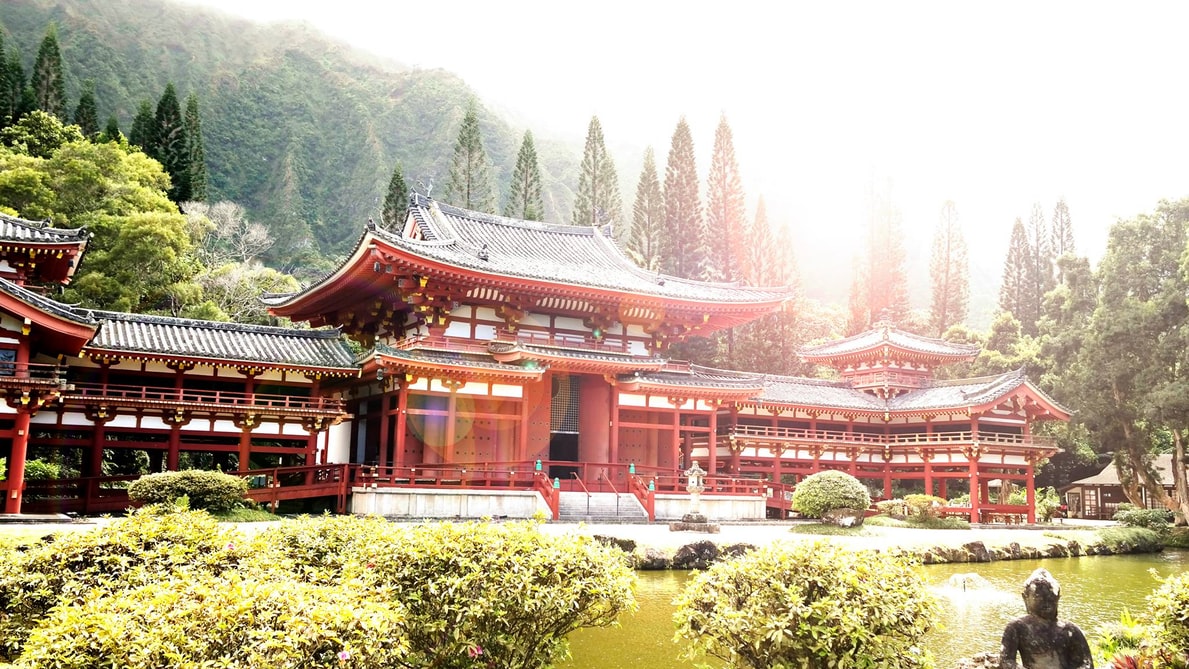 Japan is an island country in East Asia. The kanji that make up Japan’s name mean “sun origin”, and it is often called the “Land of the Rising Sun”. Japan is the world’s 4th largest island country and encompasses about 6,852 islands. The capital is Tokyo.

The country is divided into 47 prefectures in 8 regions and is the 2nd most populous island country. Its economy is the world’s 3rd-largest by nominal GDP and the 4th-largest by purchasing power parity. It is also the world’s 4th-largest exporter and importer.

Japan is a member of the ASEAN Plus mechanism, UN, the OECD, the G7, the G8, and the G20, and is considered a great power.

The “Land of the Rising Sun” benefits from a highly skilled and educated workforce- it has among the world’s largest proportion of citizens holding a tertiary education degree.

Japan is a highly developed country with a very high standard of living and Human Development Index. Its population enjoys one of the highest life expectancy and the 3rd lowest infant mortality rate in the world, but is experiencing issues due to an aging population and low birth rate.

As of 2019, Japanese citizens had visa-free or visa-on-arrival access to 189 countries and territories, ranking the Japanese passport 1st in the world, tied with Singapore.

Ease of doing business in Japan

Japan is ranked 39th among 190 economies in the ease of doing business, according to the latest edition of the World Bank Group’s Doing Business 2019: Training for reform report. 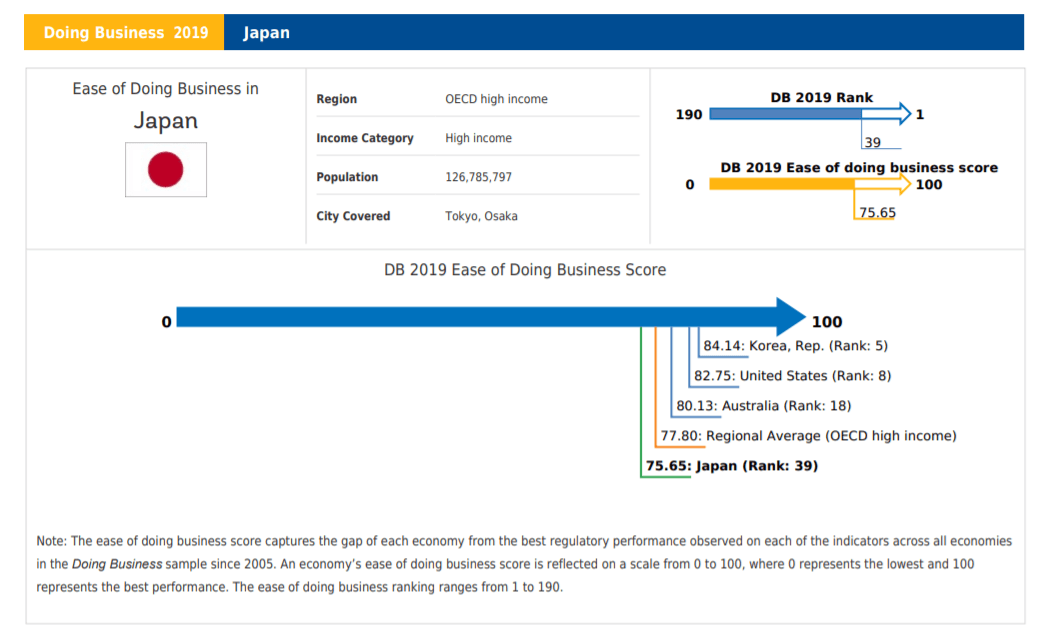 Japan is a land of contrasts- technologically innovative and modern yet traditional and hierarchical. Japan boasts excellence in sectors as wide-ranging as finance, automotive, computing and pharmaceuticals and is viewed as a major global influence – even despite the recent economic rise of China and India. The county is deemed as “mostly free” in terms of economic freedom, with businesses able to operate without the hindrance of excessive government controls.

However, despite the World Bank’s assessment economic challenges arise as the country faces a low-birth date, an ageing population and lack of reform. It is important to note that steps taken through the Japanese government’s “Abenomics” policy, based upon the three key aspects of monetary easing, fiscal stimulus and structural reforms, have made a positive impact on deflation.

The official currency is the Japanese Yen (¥). Japan legally recognizes bitcoin as a legal method of payment. However, the Japanese Financial Service Agency considers bitcoin to be an asset or commodity rather than a legal currency.

There are four most common business structures in Japan.  Setting up your payroll will depend on the type of corporate structure which is used:

Any company seeking to pay employees in Japan must have a bank account in Japan. Employers are responsible for withholding income taxes and social taxes from each employee’s salary payment. Additionally, employers make a “year-end adjustment” for most employees, which eliminates the need for the employee to file tax return.

The tax year in Japan for individual taxpayers is from January 1st to December 31st. For individuals tax returns and any payments owed are due by March 15th.

Japan’s individuals income tax system combines a self-assessment system with a withholding system that requires withholding agents (payers of salaries and wages, retirement allowance, interest, dividends and fees) to withhold tax at the time of payment and remit it to the National Tax Agency (NTA).

For tax purposes, individuals living in Japan are classified as:

The Sales Tax Rate in Japan stands at 8%.

Employer and employee contributions generally align with the exception of labor insurance.

The general breakdown is as follows:

The general breakdown is as follows:

Local inhabitant tax is made up of prefectural tax (4%) and municipal tax (6%).

Minimum wage: The minimum wages are set for its 47 prefectures and for some industries within the prefectures.

Wage payment: Usually Japanese workers receive monthly wages.  Employers must issue a pay slip stating the amount of the monthly salary and the amount of tax withheld at the time of payment.

Overtime: If an employee works over 40 hours a week then the company is expected to pay for overtime to the employee unless they work in Management position. Japanese companies that intend to use overtime on a regular basis should put in place a written agreement between employees and management commonly called “article 36″ and submit it to Labour Standards Inspection Office.

1) Leave due to death in the family

a) Death of a father, mother, spouse, or child: up to 5 days

b) Death of a grandparent, grandchild, sibling, child’s spouse, or spouse’s parent: up to 3 days.

4) Leave for jury service – the approved number of days

Bonuses and special benefits: Seasonal bonuses are paid twice yearly (Summer and Winter bonuses)  in Japan to salaried workers. The bonus amount varies from company to company and from year to year but is generally several months salary.

Termination of employment: When an employee is terminated, the Labor Standards Act requires the employer to pay wages due within 7 days. Severance pay is not mandated by law.

Workers’ compensation: Workers’ accident insurance is a government insurance program in Japan. It pays benefits to workers (or their survivors) if the insured worker suffers injury, illness, or death due to circumstances related to his or her work related duties or commuting. All companies that employ workers must provide this coverage. As of April 2012, the maximum premium rate is 10.3% (for construction work and the like) and the minimum is 0.3% (for work that is mostly clerical). 0.005% is added to the above premium to fund benefits for asbestos-induced diseases.

Record keeping: Japanese payroll reports must be kept for at least 40 years, while pay slips may be issued to employees online.

Visas: A visa must be applied for before an individual enters Japan. The type of visa required will depend on the purpose of the individual’s entry into Japan. Nationals of certain countries are allowed to enter Japan for up to 90 days without a visa.

Japan has entered into more than 60 income tax treaties, including an income tax treaty and a totalization agreement for social tax coverage purposes with the United States. Learn more on the website of the Ministry of Finance Japan.

Planning expansion in Japan? You should prepare yourself for the cultural differences.

As Boye Lafayette De Mente said in “Etiquette Guide to Japan: Know the Rules that Make the Difference”, “Japan is an example of a country in which the code of social conduct became so formal … and important, that proper behavior became the paramount law of the land.”

The concept of wa or harmony lies at the heart of business meetings in Japan, and it is not recommended to offer strong opinions or cause confrontation which might upset the balance of wa. In order to maintain a sense of wa and build strong relationships, an understanding of Japanese culture is required.

Contact us today to learn more about Payslip’s global payroll services and how a Global Payroll Management Software can help your multinational organization with the etiquette and the specific rules for payroll and taxation in Japan.