Canada is the world’s 2nd-largest country by total area. The capital is Ottawa, and the three largest metropolitan areas are Toronto, Montreal, and Vancouver.

Canada is sparsely populated- most of its land area being dominated by forest and tundra. It is one of the world’s most ethnically diverse and multicultural nations, which population is highly urbanized.

Canada is a parliamentary democracy and a constitutional monarchy in the Westminster tradition, with a monarch and a prime minister who serves as the chair of the Cabinet and head of government.

The country is a realm within the Commonwealth of Nations, a member of the Francophonie and officially bilingual at the federal level. It ranks among the highest in international measurements of government transparency, civil liberties, quality of life, economic freedom, and education.

Canada has a long and complex relationship with the United States which has had a significant impact on its economy and culture.

Canada is one of the world’s wealthiest countries and ranks highly in numerous international rankings as:

Canada is part of several major international and intergovernmental institutions including the United Nations, NATO, the G7, the Group of Ten, the G20, the North American Free Trade Agreement and the Asia-Pacific Economic Cooperation forum.

Ease of doing business in Canada

Canada is ranked 22nd among 190 economies in the ease of doing business, according to the latest edition of the World Bank Group’s Doing Business 2019: Training for reform report. 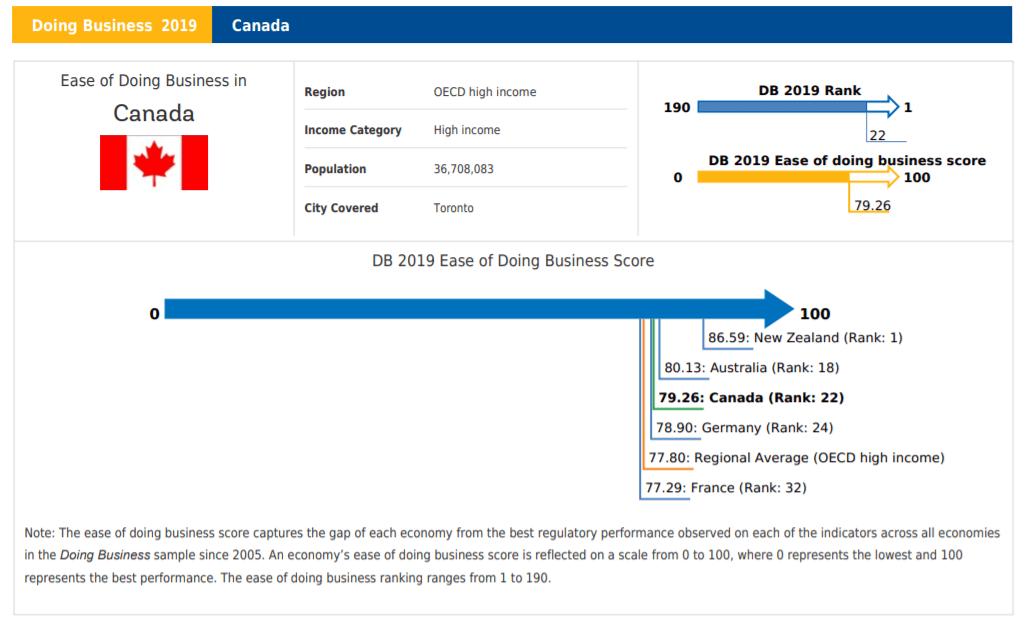 Canada is frequently recognized as having one of the most resilient economies in the world, largely because of its regulatory banking framework. As a result, Canada’s strong banking and financial services sector is a welcome environment for foreign investment.

On another note, the Canadian technology sector has been also on the rise over the past several years.

A report from the commercial real estate firm CBRE found that Toronto has created the most tech jobs of any city in the United States and Canada over the past five years. Toronto created 82,100 tech jobs, about 4,200 more than Silicon Valley during the same time period.

These investments – and those made by large technology firms and others – help to highlight the growing importance of Canada as an attractive venue for investment and innovation.

The official currency is the Canadian dollar (CAD) and Canada does not consider digital currencies to be legal tender.

Opening a branch office is one way for a company to set up a business in Canada, however, the foreign headquarters carries full liability for the branch’s operations. That is why most of the organizations that are prepared to operate in Canada for a long-term, can incorporate at either the federal or provincial level.

Employers in Canada are responsible for withholding income and social taxes and providing workplace protections for employees. Some taxes are collected by provincial and territorial governments. Quebec administers its own social insurance programs apart from the rest of Canada.

Employers are also required to complete a Record of Employment for all workers who:

The tax year in Canada is from January 1st to December 31st. By the end of 2019 employers are required to submit report to CRA.

Income tax rates for provinces and territories (except Quebec and Alberta, which do not have corporation tax collection agreements with the CRA).

Income taxes are deducted at source by employers during each pay period.

There are three types of sales taxes in Canada: the provincial sales tax (PST), the federal goods and services tax (GST) and the harmonized sales tax (HST).

The GST is a value-added tax that applies to most goods and services in Canada. The GST rate is 5%. See the full overview of sales tax amounts for each province and territory on the Retail Council of Canada website.

An employee’s responsibility is comprised of two parts: Canada Pension Plan (CPP) (or the Quebec Pension Plan for employees working in Quebec) and Employment Insurance (EI). Contributions made by an employee to CPP, QPP or EI are creditable against that individual’s federal and provincial income tax liability. The credits are calculated at the lowest federal and provincial tax rate.

CPP contributions are required to be deducted from an individual’s remuneration if the individual is employed in Canada, aged between age 17 and 71, and receiving pensionable earnings. The employer is responsible for withholding and remitting the individual portion and a matching employer portion to the CRA, or to the MRQ in regards to QPP contributions.

EI is a federal payroll tax required to be deducted from an individual’s remuneration if the individual is employed in Canada and is receiving insurable employment earnings. The maximum employee contribution for 2019 is CAD 860 and the corresponding maximum employer contribution is CAD 1,204.

• Payroll tax – Manitoba, Quebec, Ontario and Newfoundland impose a formal employer payroll tax with the top rate ranging from 1.95% to 4.26% of the annual gross wages, salary and other remuneration paid by the employer. In the Northwest Territories and Nunavut, the payroll tax is levied on employees and is deducted at source by employers. In Quebec, employers also must pay a labor standards contribution of 0.07%; provided the total annual gross wages exceed CAD 2 million, the employer also must participate in workforce skills development, investing 1% of annual gross wages in training or paying the non-invested difference to the Quebec government.

• Real property tax – Municipal authorities levy taxes on the occupation of real property. The tax is deductible in calculating the corporate tax liability.

Minimum wage: Canada does not have a national minimum wage. Each of Canada’s 10 provinces and 3 territories has a standard hourly minimum wage rate. See the full list by providence on the Retail Council of Canada website.

Wage payment: Employers are required to pay employee wages on a regular basis depending on the individual agreement.

Hours of work: The standard hours of work in Canada are 8 hours per day, or 40 hours in a week. The maximum time permitted for work per week is 48 hours.

Overtime: Hours worked beyond the standard hours of work in a day or week are considered overtime and must be paid. Each province and territory has an individual overtime rate. See the full federal / provincial overtime calculations here.

Employee leaves: With the sole exception of Quebec, all of Canada is covered by Employment Insurance plan. The amount received is calculated based on a person’s previous 52 weeks of employment, so long as those earnings were consistent. This includes not only wages but also bonuses, tips, and even commissions.

– Maternity leave: Mothers can get up to 15 weeks of compensation at 55% of their earnings, up to $562 per week. This can start anywhere between 12 weeks before the due date, and up to 17 weeks after the birth.

– Parental leave: Includes situations like adoption placement in addition to a birth. This, too, gives employees 55% of their income at up to $562 per week, though each parent must choose the same option.
There are two different types of parental leave:

– Murdered and missing children: Employees are entitled to up to 104 weeks’ leave to cope with the death or disappearance of their child.

Quebec’s Parental Insurance Plan offers maximum insurable earnings of up to $76,500. Its plan also has a few different configurations to choose from, depending on the situation, including:

Bonuses and special benefits: Canada does not require employers to provide bonus payments to employees.

Termination of employment: Employers must give individual employees written notice of an intent to terminate their employment at least 2 weeks before the intended termination date. Instead of providing the written notice, employers can pay employees 2 weeks of wages.

Workers’ compensation: Employers are required to secure workers’ compensation coverage so that their workers can have access to replacement income in the event of injury or illness in the course of employment. Learn more on the Government of Canada website.

Record keeping: Employers must retain all records of employment and supporting documents for a period of 6 years from the end of the most recently filed tax year.

In general, business visitors to Canada from developed countries do not require a visa to visit Canada for less than 6 months. After 6 months, foreign workers can apply for a work permit, which are valid for up to 4 years.

Canadian employers are responsible for requesting a labor market impact assessment (LMIA) from the Canadian government before hiring foreign workers.

Visas: Citizens and permanent residents of the US and many European countries do not need a visa to visit, transit, or do business in Canada. They still must possess a valid travel document (a passport) and have a valid reason for being in Canada. The North American Free Trade Agreement (NAFTA) allows US and Mexican nationals freedom in activities such as research, marketing, and general service, which other nationals cannot participate in without a permit.

Business visitors in Canada are different from temporary workers and are expected to stay for less than 6 months and not earn money in Canada. Foreign workers generally must have a job with a Canadian employer before moving to Canada and must be in Canada to meet a specific labor need.

Taxes: You are a non-resident for tax purposes if you:

• normally, customarily, or routinely live in another country and are not considered a resident of Canada
• do not have significant residential ties in Canada
– you live outside Canada throughout the tax year
– you stay in Canada for less than 183 days in the tax year

Canadian residents in the US: Canada has both an income tax treaty and a social tax totalization agreement with the US. Canadians must meet general visa requirements and be certified to be employed in the United States. They are eligible to work in the US under:

– TN visas – They are valid for 3 years and were created under the North American Free Trade Agreements between Canada, US and Mexico.
– H-2B visas – They cover labor or services of a temporary or seasonal nature in occupations other than agriculture or registered nursing. The number of H-2B visas issued each year is limited by the US law.

Canadians are subject to US employment-based taxation on income earned in the US, unless they can claim an exemption under certain tax treaty provisions, or they work under specific visa types that exempt earnings from taxes. State and local taxation of Canadian workers also can apply.

Thanks to its strong open-market system, friendly global commerce environment, and well-educated workforce, Canada attracts businesses from around the globe. Companies with operations and payroll in Canada require global payroll software solution and visibility over the entire global payroll information. With the right payroll management technology, it’s possible to streamline processes and ensure total payroll compliance.

Contact us today to learn more about Payslip’s global payroll services and how we can help your multinational organization.